Stories that grew out of a beautiful autumn day in Plas Power Woods for the Woodland Trust with some 40 people visiting us through the day, along with several friendly dogs, a possible bear and occasional breezes. We listened to tales of animals and children and monsters and learned that we need

to be kind to Conker Trees as they remember when they could still run around the dance and play….

Deep in the woods, an old witch lives

Putting on make-up down by the stream

her hair is leaves and grass

Eyes as dark as a forest pool

In skin as green and grey and rough as bark

A shadow by the rapids

Sharpening stones on the riverbank

Fitting her mouth for teeth 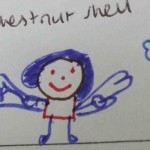 One bright autumn day, two woodland fairies, Stephanie and Jasmine, were out exploring the forest. They should have been busy flying the Royal Butterflies but were fed up up with the Butterflies because whenever the girls took them out, the insects all flew in different directions and the little fairies felt as if their arms were going to be pulled off!

So today, they had tied the butterflies to a bouncy tree branch and gone off looking for an adventure

Stephanie and Jasmine went deep into the woods. Here, they could hear the rushing of the river and the rustling of the leaves. They felt the roughness of bark and smelt the dampness of water and mud and moss

In the middle of the woods, in a pool of sunlight by the river, they met a beautiful blue dragonfly.

The dragonfly told the girls about a wonderful white deer that had been seen in the woods, a rare and magical animal

Under the oak trees,

Across the river on the stepping stones

Between one tree and the next,

Between daytime and night-time,

Between sunset and moonrise,

In the mist and the woods,

Where the squirrels look down from the branches,

And the hedgehogs look up from the bushes,

The fairy girls disappeared and

No-one has seen them again. Yet… 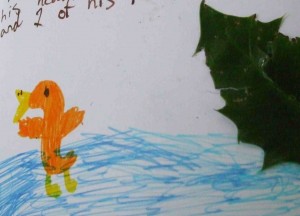 One sunny and windy afternoon, a very hot duck was swimming in the river trying to cool down, when suddenly a huge holly leaf blew down on the wind and landed on his head! The leaf was very spiky and knocked some of his feathers out.

Bob the duck went swimming away down the river. At a very loud waterfall he stopped and listened to some birds singing. A girl came to look at the waterfall and the birds. Bob didn’t want the girls to see him so he swam further and further down to the very bottom of the waterfall.

But as swam down, he could smell delicious pie. The smell wasn’t coming from the bottom of the pond but from up where the girl was. Bob decided that he didn’t care if the girl stroked him – he just wanted pie! 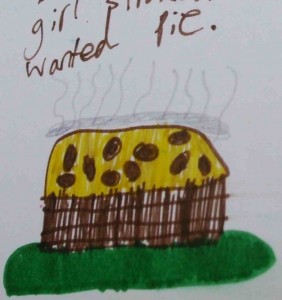 Bob swam up to the top of the pool and the girl said, “What are you looking for?” and Bob said, “I’m looking for pie”. So the girl showed Bob the way to the pie. But as they walked through the woods, a giant spiky conker fell on the girl’s head. It hurt.

So Bob helped the girl through the wood and forgot that he was missing some feathers. When they found the pie, they both felt better and stayed together to have pie for tea 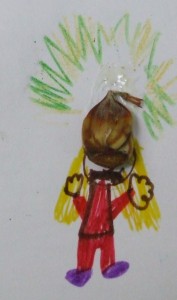 arrive anytime – after 11, there will be a self-guided storytrail to take you down to our camp in the woods

What are we doing? 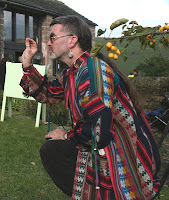 I’ll be telling woodland stories and tales of trees: of dancing birch trees and sad cedars, of the dramatic history of horse chestnuts and why we need to be very careful around oak and willow trees

The walk through the woods will give us new stories, as well, building new adventures for visitors to the woods out of the sounds we hear, the smells of autumn, fallen twigs and floating leaves: anything might feed into new tales!

To find out more and get directions, visit the Woodland Trust site

Picking up on the lovely “Forgotten Forests” project, I made a point of going back to some of my personal “Forgotten Forests” when I was visiting my parents a couple of weeks ago. They still live in the house where we all grew up, in the ‘concrete jungle’ that is Cumbernauld New Town. Out of that visit, came the following….

I spend a lot of my time “on the road”, travelling around, visiting schools, telling stories, leading workshops. Emotionally, I’m very self-contained but once in a while, I find myself wishing I was travelling with someone else, someone to share experiences with. And this time, to share these woods with. For these are the woods that shaped me, gave me the chance to become who I am now. These trees, stones and pools offered solace and shelter and inspiration to my teenage self. These forgotten forests were my refuge as I grew into an awareness of myself as both gay and pagan.

Red Fox Valley. Blackwood. Here I watched my first roebuck, encountered the scarab-excitement dor beetles for the first time, caught my first Great Diving Beetle, met wood anemones and the sharp, sour leaves of wood sorrel. There are pools at the heart of both places: ponds for exploring, offering palmate newts and common toads and a richness of delight.

Blackwood in spring sports bluebell clouds among the rubbish that is scattered through the trees. The bluebells suggest age and some of the trees hold a century or two, predating the quarry and somehow surviving the devastation of the rest of the hillside. Now the trees have claimed the quarry site as well, branches knitting over awkward hollows and sudden drops. The main quarry flooded at some point. A deep, dirty brown pool with fish that moved the water but that I never quite saw. The water gave no clues, reflective but with no clarity, it could have been bottomless or maybe just waistdeep. Mysterious. Kelpie waters, full of invitation, promise and threat. The oldest trees are on the edge of the woods. Their offspring crowded inwards, to the very banks of the pond. They are not big trees, but hefty, gnarled and twisted, holding their own mystery with their moss and lichen and those defiant, enchanted bluebells. The faerie trilogy of trees: Oak, Ash and Thorn.

To walk through Glencryan Woods, along the edge of Red Fox Valley is to look down into a forested depth. A canopy view from the rim of the glen, peering down into the burn’s cut, layers of sandstone quarried by water and tunnelled by men looking for fireclay. The old mine workings were always a temptation and a threat, unstable tunnels, dropping bricks. There were caves too, to scramble into and dream of wildlives, living rough, foraging Crusoes; the lost, unknown, mysterious wildmen of the woods. For me, greater and more lasting than adventure, Red Fox Valley woods brought stillness. The pool at the head of the glen was where “meditation” moved from exercise to experience with the reflections in that water and the trembling leaves of birch trees.  Back down in the glen, line of old, old beeches taught me patience, with branches to scramble onto and there to sit and simply stop. The beeches’ presence kept clear the earth beneath green-filtered canopy, offering a space for my first dances of transformation, My first, adolescent, ceremonies were here, opening myself, giving myself to a green world.

These were the forests that shaped me, that held my heart safe in their wooden treasure-chests until I was ready to leave, a sapling myself, and go out into the world beyond the woods. My own Broceliande, a faerie land where I could disappear and be safe from that other world from a while. They are still there, these woods. Maybe not forgotten anymore. They look more cared for now. There is less rubbish, but more people. Blackwood is ringed by some new estate of smart houses but the old, twisted trees have survived; while the woods in Red Fox Valley have grown, are growing, swallowing the old sneaky tracks through the trees, offering sensible gravelled paths instead. But a wildness is still there, in both woods; a freedom of toads, adventure and stillness. A wildness at the heart of things.