Once and Future Giants: What Ice Age Extinctions Tell Us About the Fate of Earth’s Largest Animals 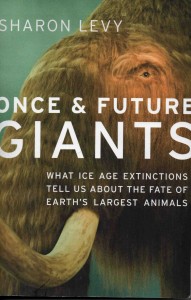 I have a deep and abiding affection for mammoths and an awful creeping suspicion about our ancestors’ role in their extinction. So I started reading  Sharon Levy’s book with a mixture of wariness and excitement. 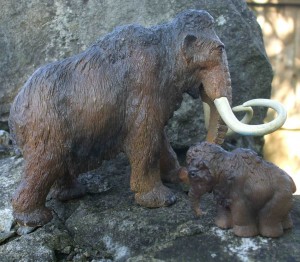 This is a fascinating read, exploring the changing landscapes of an Ice Age and post-Ice Age planet, mostly from the perspective of the megaherbivores. My mammoths were there – and so were herds of large grazers, mastodons, ground sloths, giant kangaroos in Australia, moa in new Zealand, Aepyornis in Madagascar – and giant tortoises just about anywhere else that didn’t have any of the others. Mixing sound observation with deduction and careful parallels with modern ecosystems, Levy dives into the ecology of those prehistoric landscapes. It makes fascinating reading: from the sheer physical impact of herds of mammoth (and all the other) to their role in maintaining biodiversity, their vulnerability to predation (yes, we were there, too, alongside sabretooths and giant eagles) and the decline of, especially northern, ecosystems in their absence. It’s not that long ago: 10,000 years – and less, hundreds in some cases – is not long in ecological terms and that absence is still felt

Levy weaves research from different disciplines to make a coherent and compelling argument for the vital role of giant herbivores in maintaining viable and diverse ecosystems and while work on extinct animals has to be speculative, she draws carefully on current research on extant equivalents to fuel her arguments and to lend weight to discussions. You only have to look at how wildlife “management” missed the long term impacts of elephants on East African landscapes to appreciate that those large animals have been deeply misunderstood, their impact seen in the short term and to realise how little we really know about even the largest of our terrestrial neighbours. Looking beyond its immediate subject matter, Once And Future Giants is a celebration of the intricacy and subtlety of natural systems, in constantly reminding us that modern science hasn’t been looking at these processes for long enough to grasp the depth of the processes and that, where the knowledge survives, traditional cultures can fill in a lot of the spaces – and equally that traditional knowledge is not infallible and in the end reflects upon practices that helped humans survive – sometimes at the expense of other species. 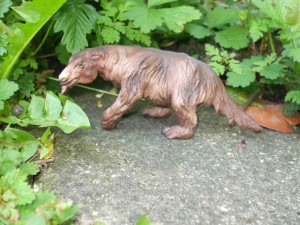 Elephants feature again in the final aspects of the book: the reintroduction of large herbivores. That could mean returning lost species to familiar landscapes – beavers or moose in Britain, perhaps. “Rewilding” inevitably gallops onto the pages.This is fascinating, exciting and provocative work: essentially, allowing animals to get on with it with minimal interference (and even less “management”). In western Europe there are notable examples in the Netherlands and an interim stage can be seen with the feral, or half-wild herds of ponies and aurochs-like cattle in used in some nature reserves. This then feeds into discussions about the presence or absence of predators and opens up old discussions for Britain about our native ponies, feral sheep and goats and soaring numbers of deer. But always we come back to what counts as a megaherbivore: big, hefty and doing a job that seems to have been lost. And we step straight into Australian controversy  with camels and water buffalo possibly replacing lost marsupial giant kangaroos and wombats (in tandem with Native Australian fire-setting regimes). We meet reintroductions advocated for reindeer, musk-ox, horse and bison in other northern climes and some ambitious plans for Siberia (at least they still have wolves and occasional tigers). One of the most charming campaigns is the spread of the Bolson tortoise in the deserts of the American south-west. Large, but not a giant, it still trundles in as the biggest herbivore in its small world and has enthusiastic champions among ranchers and environmentalists. And elephants – dreamers talking of replacing those lost Columbian mastodons with African elephants in continental America, letting them roam over the rangelands and start rebuilding older, richer ecosystems.

And my mammoths? Acknowledging they have gone (regardless of excited claims from gene-spliced scientists), the passing of those heavy-footed, hairy herds is marked with a sigh – at least by me

A book to be recommended. Fascinating, rich and readable it gives the reader a lot to think about, discussions to have and arguments to pursue – if only with oneself!

Models in photos, made by: